To key to styling broad-shouldered women is to highlight the broadness, not hide it. Here’s how to effectively dress broad shoulders on women.

If you found this article through a Google search, chances are, you’re one of the many women who see her broad shoulders as something to be “hidden”. You probably see them as manly and unattractive. But in this guide, you’re going to learn the opposite.

To dress broad shoulders on women, the shoulders must be accommodated. Not hidden, not downplayed. Accommodated. Meaning showcased in their full glory. You might think it’s counterintuitive but it’s anything but. If you want to revolutionize your style, without hiding some parts of yourself, and end up looking fantastic, this guide is for you. Here’s how to dress broad shoulders on women.

Step 1: Determine if you truly have broad shoulders.

Since it’s possible for anyone to misjudge her body shape, let’s first define what broad shoulders mean and look like.

How to know if you have broad shoulders

Follow these steps to determine whether you have broad shoulders.

If your shoulders appear wider than your hips, then you have broad shoulders.

In this body sketch, the width of the shoulders is unmistakable.

Also, the waist has an almost straight outline because it’s only slightly defined. As a result, it ends up forming an elongated line from the waist down. Therefore, this sketch both has shoulder width and elongation. Remember this as a reference for later.

Also, it’s entirely possible to have a slightly different sketch from this and still have broad shoulders. For example, instead of an elongated line from the waist down, you’d see a noticeably curvy set of hips, hence the elongation isn’t present due to the rounded hips.

But if your shoulders look relatively equal in width or even slightly smaller than your hips, then you do not have broad shoulders. You either have a balanced or a pear-shaped body.

Now that you’ve confirmed the broadness of your shoulders, it’s time to learn what shoulder accommodation is.

Shoulder accommodation means dressing up with your prominent shoulder width in mind. This means wearing outfits that provide enough space for the shoulders to extend. This is the opposite of “downplaying” or “visually reducing” the shoulders.

Instead of hiding the bulk of your shoulders, you are instead following the natural shape of your bones.

But won’t it look unattractive if the silhouette doesn’t totally resemble a balanced hourglass? Absolutely not! Quite the opposite!

Take a look at this example. Here, we have Princess Diana of Wales in a bikini:

As you can see, she’s a classic example of a woman with broad shoulders.

Now, take a look at this second photo of her wearing a dress.

This dress undoubtedly flatters her figure. But would you have guessed that the silhouette is not that of an hourglass?

If we trace the outline of the dress, the shape we get is not an hourglass. Instead, we get an inverted triangle–wide shoulders, narrower hips. And yet, the silhouette is flattering!

This shows that any body shape could be beautiful if the dominant body parts that require accommodation are accommodated. In the case of Princess Diana, it’s her broad shoulders.

Now, if the shoulder area of the dress was made narrower to form a balanced hourglass figure instead of following Princess Diana’s broad shoulders, it would end up looking forced, restricted, and ungraceful on her.

This is due to the contrast that’s inevitably formed when two opposing elements (broad shoulders and narrow dress) combine. The result? A disharmonious ensemble.

In short, this dress is flattering not despite its inverted triangle silhouette but because of it. It follows the wearer’s natural bone shape.

Let’s say that Marilyn Monroe, a true hourglass, wears this exact same dress. The result wouldn’t be too flattering. Why?

Because, unlike Lady Diana, Marilyn’s shoulders need no accommodation. Therefore, for her to look great, the dress would need to be altered so as not to aimlessly stick out.

Another possibility is if the dress offers an excellent stretch and flexibility that it could suit both body shapes (With the current textile technology, it’s not impossible). Only then would the dress make sense for Marilyn’s shape.

Otherwise, the roominess of the dress’ shoulders would just “drown” her petite and rounded frame.

Does that mean that Marilyn cannot wear this particular style? Absolutely not!

Here’s a picture of Marilyn wearing a similar long sleeve dress but specifically tailored for her hourglass figure.

Any woman can wear any style as long as the fit accommodates her natural shape. Period.

Here are other examples of broad-shouldered celebrities who look stunning when their broad shoulders are allowed to stay broad.

Therefore, if you have broad shoulders but you’re not confident with them, understand that they are not something to be hidden. They are not problem areas! They’re simply a different form of expression, and like any other expression, they should be honored.

To understand shoulder accommodation better, it’s important to learn its opposite. Below are a few examples of ensembles that do not accommodate broad shoulders.

When the straps are too close to each other.

These are two dresses with almost similar designs. But I’m sure you would agree that the left dress looks more flattering than the right. This is because, unlike the right dress, the left dress perfectly accommodates the model’s shoulders.

Another example is this outfit of Jennifer Lawrence.

If you look closely, the straps are simply too close together to do her shoulders justice. The rest of the outfit looks great.

For this to look great, the straps need to be farther apart to honor the wideness of her shoulders.

Here are better outfits of her with straps just spaced widely enough to honor her shoulders.

A lot of fashion advice say that thin straps are unflattering for broad shoulders and that they should only stick to thick ones. But the truth is, all broad shoulders can wear any straps of any width as long as their broadness is accommodated.

When the hips are too flared out.

Shoulders should not be the only determining factor if an outfit looks good on broad shoulders. Remember the sketch I showed you earlier showing width on the shoulders and elongation from the waist down? This is how elongation, as well as width, should be honored.

This outfit of Cameron Diaz, for example, sufficiently honors her shoulders. However, the lower part of her body (from the waist down) has too much flare to match her elongation.

This outfit could be redeemed if the waist part was narrower so as not to drown the elongation that Cameron naturally has.

Too wide of a flare at the lower part is usually unflattering because most broad-shouldered women do have elongation. This elongation, like shoulder width, needs to be honored. And wearing outfits with too much flare cancels out that elongation leading to an unflattering silhouette.

As you can see, these outfits do a great job at not only highlighting her broad shoulders but also her elongation. This is going to be the case for most broad-shouldered women.

If you’re sure that your shoulders have been accommodated but the outfit still doesn’t look right, inspect if your elongation is also honored. You can do this by ensuring that your waist-to-hip area isn’t too wide and flared out.

The most precise way to examine this is to trace the outline of your outfit with you in it. If it flares out wide and outwards then it will cancel out your elongation. If it’s a little loose but the angle is still going vertical and elongated then you might get away with it.

If in doubt, look at the outfit in its entirety and at how its silhouette sits in your natural bone shape. If it follows your bone shape, then it’ll look aesthetically pleasing.

It takes a lot of observation and practice to train your eyes to recognize the absence and presence of width and elongation but once you do, shopping for outfits will be a little less daunting

Now that you’re convinced that wide shoulders should be showcased instead of hidden, how do you do that? What neckline should you pick? What styles should you stick to? The answer, unfortunately, isn’t so straightforward.

Technically, all necklines of all styles can look great on broad shoulders. You only need to follow one rule: The shoulders must be accommodated.

While I’m going to give you a list of the go-to necklines and styles for broad shoulders, know that this is not a foolproof guide. If the space for the shoulders simply isn’t enough, then it simply will fail to flatter.

As long as the silhouette allows the natural shape of the body to express itself, then it will look good. Having said that, here are the best necklines for broad shoulders.

In this section, I answer the questions that broad-shouldered women frequently ask when shopping for outfits.

Turtleneck outfits can look great on broad shoulders as long as their shoulders area accommodates the broadness of their wearer’s shoulders. Also, because their necklines are closed, it’s easy to kill the entire outfit if the right fit isn’t chosen

This turtleneck top, however, does a great job at shoulder accommodation because the shoulder seams are spaced widely enough to accommodate the broadness.

A good rule of thumb is to ensure that the shoulder seams (highlighted in white dots above) align with the point where the shoulders meet the arms. Anything less than that would be too narrow.

Yes, broad shoulders can definitely wear puff sleeves and look great in them. The best example of this is Princess Diana of Wales who is a classic broad-shouldered woman. Heck, even her wedding dress was adorned with puff sleeves!

Conventional fashion advice might tell you to avoid garments that widen the top part of your body, but aesthetically, nothing is more unflattering and forced than hiding the natural shape of your bones and passing it for something else.

Forget about mimicking the hourglass shape! Aesthetically, an hourglass is never the basis of whether or not a body shape looks beautiful. It is only by honoring the natural shape of your bones will you achieve an ensemble that’s graceful, beautiful, and is a true reflection of yourself, not a cheap copy of someone else.

Women with broad shoulders can definitely wear sleeveless like women with narrow shoulders. As long as the straps are far enough from each other and the shape of the outfit accommodates the wearer’s shoulders, then the resulting ensemble will be stunning.

If you need a detailed guide on how to pick the best sleeveless outfit for your broad shoulders, head over to this article: Can Broad Shoulders Wear Sleeveless? Here, I showed the different types of sleeveless and how they can be styled to specifically flatter a body with wide shoulders. 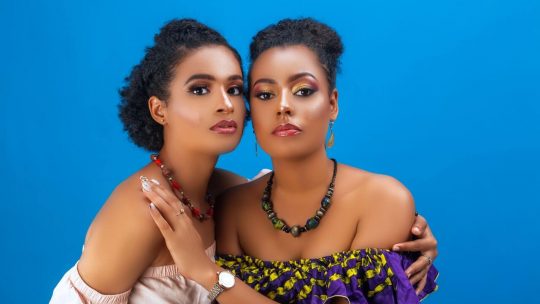 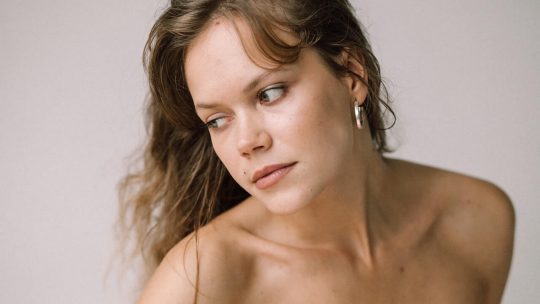 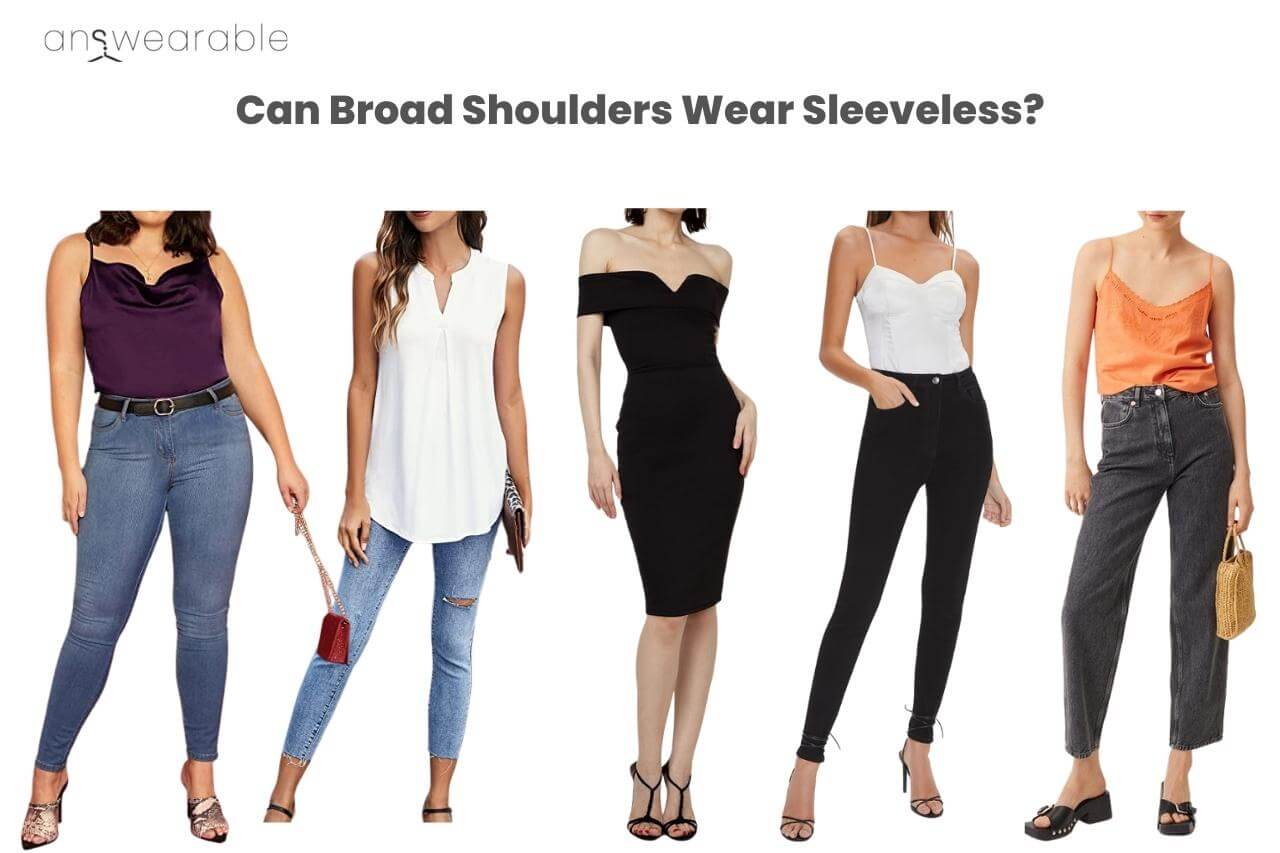 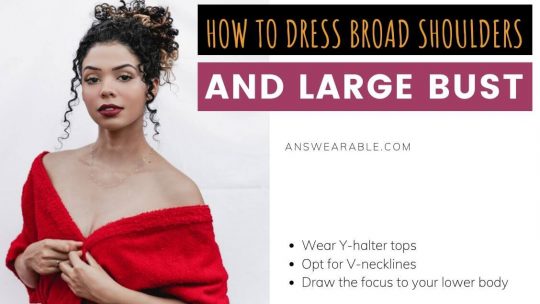 How to Dress Broad Shoulders and Large Bust 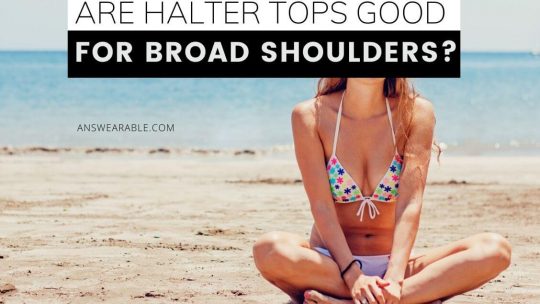 When it comes to halter tops and dresses, there are 3 types of women: The ones who look stunning in them, the ones who don’t (but wanna figure it out), and the ones who are still unsure. This article will help the second figure it out and the...